The statistical analysis module Statistics, implemented in the GEORADAR-EXPERT software package, is intended to summarize the results of GPR profiling and to visualize the variability of GPR data. Using the results of statistical analysis, presented in the form of tables and graphs, it is possible to establish a relationship between the physicomechanical characteristics of the medium under study (for example, soil or building structures) and various statistical indicators, thus forming a set of features that can be used in the future for assessment of the condition of similar objects.

Statistical information is calculated once and stored in a specialized data file. In the same file, you can save the visualization settings for statistical data. The source of statistical data are GPR profiles, sections calculated on the basis of the results of BSEF automated analysis (sections of wave field attributes or characteristics of the medium under study) and vertical cross-sections of the 3D assembly of these sections.

If the user created layer boundaries on a GPR profile, attribute section or 3D assembly cross-section, then statistical indicators are calculated inside each layer, along the boundary of each layer and for the statistics source as a whole, without regard to division into layers. The convenient layer navigator allows you to select layers or layer boundaries for which statistics should be displayed, assign names to layers, select statistical indicators and control the visualization of statistical data.

The Statistics module provides the ability to set a threshold, values ​​above or below which are displayed in red on the graphs. The position of these threshold violation zones on the GPR profile and their statistical characteristics can be saved in the MS EXCEL table. Setting a threshold on the statistical graph makes it possible to make the process of detecting various defects of the object under study more effective if the defect is a violation of a certain threshold attribute value. The use of threshold analysis is especially effective for processing the results of GPR monitoring of very extensional objects - roads and railways. 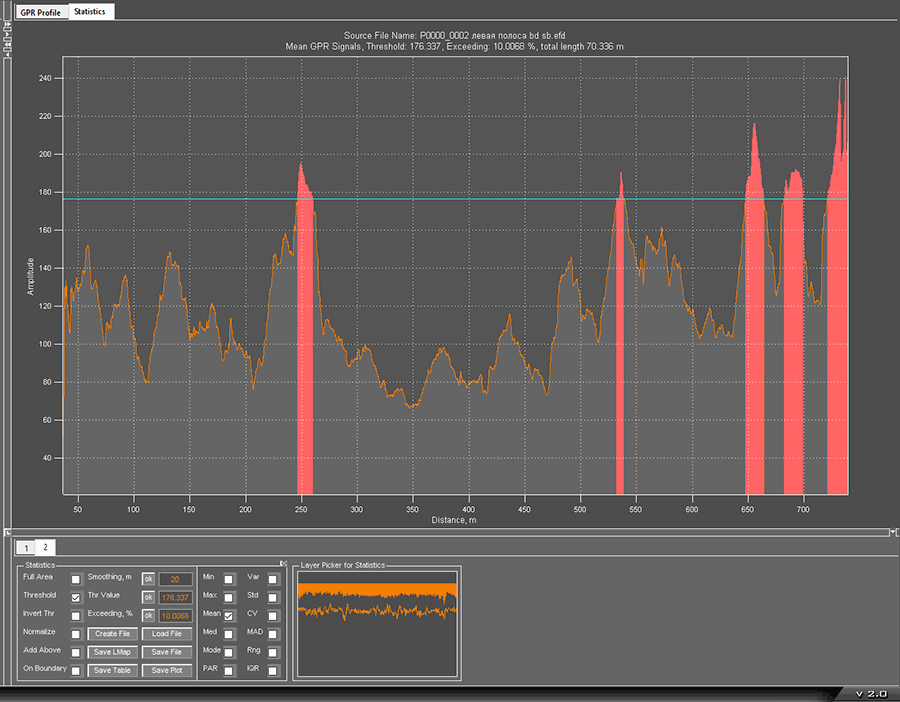 To use the results of statistical analysis in third-party programs, it is provided to export all statistics indicators for all elements of the statistics source to ASCII encoded text format tables. The statistics plot can be exported to a graphic format file.

Added the ability to adjust the position of GPR traces vertically

Added the ability to adjust the horizontal position of GPR traces 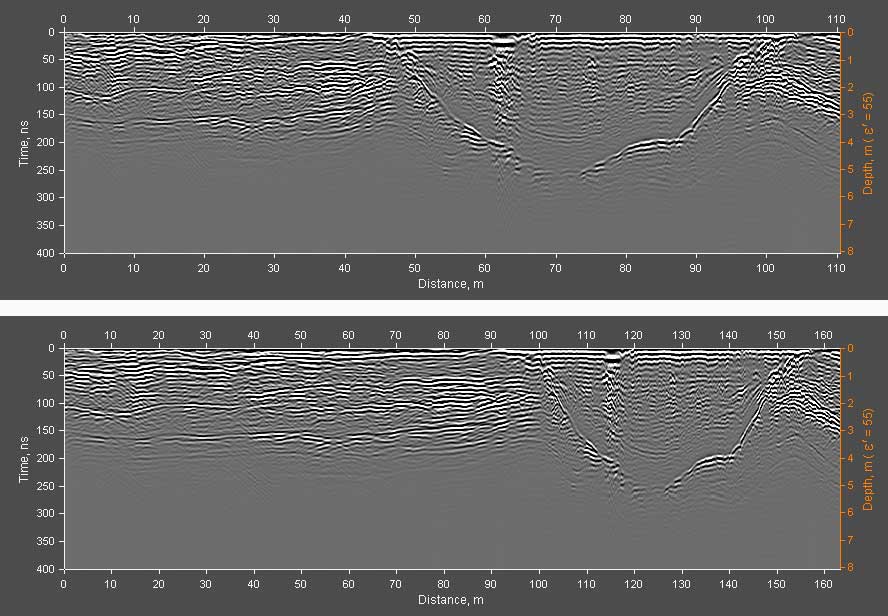 Muting is used to zero amplitudes on GPR traces. For example, if you apply a muting of a water layer on a GPR profile, then the BSEF analysis result for this GPR profile will be faster. To specifying the area of signal zeroing, the user creates a boundary and selects the direction of the muting - above or below this boundary. The following shows the result of applying muting above a given boundary.

Added the ability to create a volume table in 3D

When a 3D assembly contains isosurfaces, these isosurfaces divide the volume of the 3D assembly into parts. Now it is possible to create a table of volumes of these parts in cubic meters and save this table in MS EXCEL format. 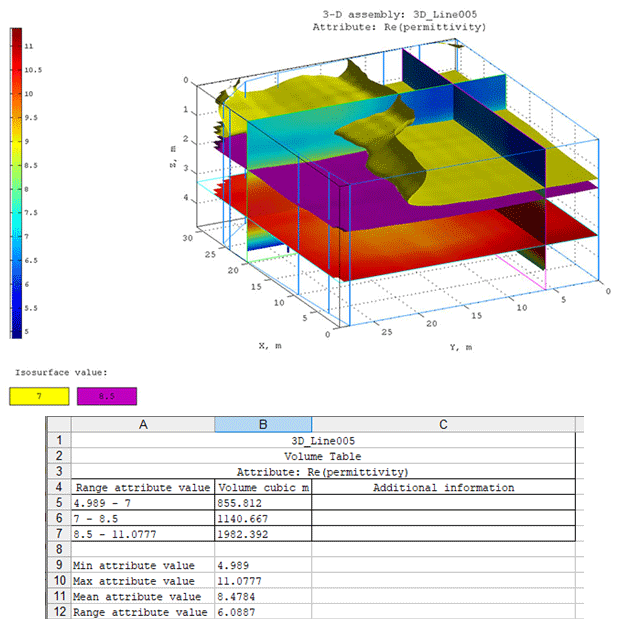 If necessary, the user can set the step for moving a cross-section along the corresponding axis of the 3D assembly and start automatic saving of images. The program will begin to change the position of the cross-section on the axis in accordance with a given step, while at each step saving the image of this section in a graphic format. This saves a lot of time compared to moving and saving cross-sections manually.

By clicking on the line that indicates the position of the GPR profile on the 3D assembly, you can call up a pop-up window that displays the name of this GPR profile. This allows you not to get confused in finding the GPR profile you need, especially if there are a lot of them.

When calculating the section, the ability to change the window of vertical smoothing with increasing depth is added

Now, to configure the parameters for creating a section based on an automated BSEF analysis, it is provided to enter the size of the smoothing window vertically not as a single value, but as a range of values. This makes it possible to take into account the geometric divergence of the wave front on the GPR profile. Thus, when calculating the section, the size of the vertical smoothing window will change in accordance with the specified range - the minimum smoothing will be at zero depth of the section, the maximum smoothing will be at the maximum depth of the section.

The change in the cluster analysis of the permittivity

Implemented an extended input of the number of clusters for clustering the dielectric permittivity section. If a single value is entered, a cluster section is created with the number of clusters equal to the specified value. If a range of values ​​is entered, for example 10-20, then a separate cluster section is created for each value of the range, and the final result is the result of averaging this group of cluster sections. Thus, there is a decrease in the influence on the final result of a random choice of clustering centers in the initial phase of calculations of k-means method.