Along with automated BSEF analysis and creation of sections containing the properties of a subsurface environment or GPR wave field, GEORADAR-EXPERT implements a complete set of data processing methods that should be present in every software for processing GPR information. These are various types of filtering and other standard options for digital signal processing; configuring GPR profile parameters; working with user-defined layer boundaries, etc. - In a word, everything that a geophysicist is used to working with. The entire functionality of the GEORADAR-EXPERT software is described in detail in the user manual, which can be downloaded on this link:

Along with this, GEORADAR-EXPERT implements algorithms and signal processing methods specially developed for this software. For example, the B-Detector (Boundaries Detector) method.

The B-Detector method is designed to detect reflections from the boundaries of layers in the wave pattern of a GPR profile, suppress interference that overlaps these reflections, and increase the vertical resolution of GPR data. Using the B-Detector, the user manages the frequency and width of the spectrum of the signals, thereby changing their duration and degree of detail of the radarogram.

In addition, determining the exact position of the boundaries on the wave pattern of a given GPR profile vertically is also difficult, because phase displacements of signals as a result of superposition of reflections from the neighboring boundaries of the layers introduce distortions. Regardless of how the user will determines the position of the boundaries - by the extrema of the same phases of the signals or by the line of changing the sign of the amplitude of the signals, or something else - these phase distortions will affect the accuracy of positioning.

In such a situation, it would be logical to use an antenna with a higher frequency to emit a probe pulse of shorter duration, which would lead to an improvement in the resolution of the signals. But then the depth of the GPR study would decrease. The fact is that the damping coefficient of the radio pulse in the subsurface environment increases in proportion to the increase in the frequency of the radio pulse. For this reason, at the hardware level, it is impossible to achieve an increase in signal resolution without reducing the depth of the GPR study. At the software level, it is possible to partially overcome this contradiction using the B-Detector method. The figure below on the right shows the result of applying this method to the GPR profile under consideration: 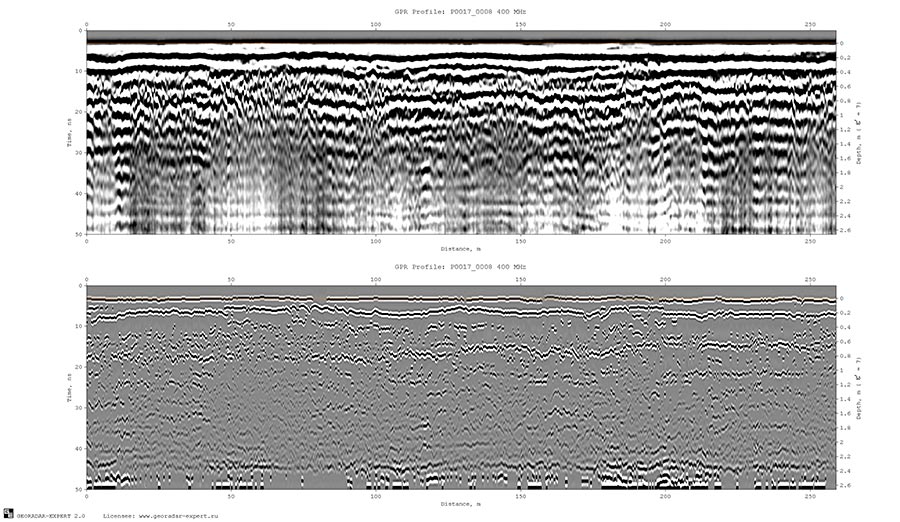 B-Detector treatment allowed us to confidently detect the lower boundary of the pavement, the depth of which varies around the 0.2 meter mark, and this boundary is difficult to completely detect on an untreated GPR profile. In the figure below, on the left is the amplitude-frequency spectrum of the raw signals of the GPR profile, on the right is the spectrum of these signals after applying the B-Detector method:

As a result of applying the B-Detector method, the central frequency of GPR profile signals increased by about 3.5 times - from 264 MHz to 911.4 MHz. The width of the signal spectrum increased by 3.7 times - from 74.7 MHz to 277 MHz (the wider the spectrum of the pulse, the shorter its duration, which means better vertical resolution of the radarogram). About the GPR profile, after applying the B-Detector method, we can say that this GPR profile was recorded using a imaginary GPR with an antenna 400 * 3.5 = 1400 MHz, but at the same time the penetration depth of the probe pulse of this imaginary high-frequency GPR same as a real GPR with a 400 MHz antenna.

If the GPR used for road research does not have the ability to simultaneously record several GPR profiles, then in order to obtain two radarograms it is necessary to go through the same profile two times with different antennas. In this case, using the B-Detector method makes it possible to abandon the high-frequency antenna and record not two, but only one GPR profile of the road using a mid-frequency antenna. For example, 400 MHz - as in this example. In this case, the volume of field and cameral work will be halved. Considering the significant volume of GPR profiling in road research, this is a tangible saving. Even in the case of using a multi-channel GPR, which allows you to simultaneously record more than one GPR profile, using the B-Detector method reduces the amount of cameral work and improves the quality of processing GPR data.

Another argument in favor of using the B-Detector method. A small design and surveying company company may not have a complete set of GPR units that cover the entire frequency range used in georadiolocation. The purchase of a large amount of this equipment requires significant financial costs. In this case, the application of the B-Detector method will compensate for the absence of high-frequency antennas by using low-frequency antennas in those areas of GPR research in which high-frequency antennas are used. Thus, the range of tasks to be expanded, which will lead to an increase in the number of GPR research customers. 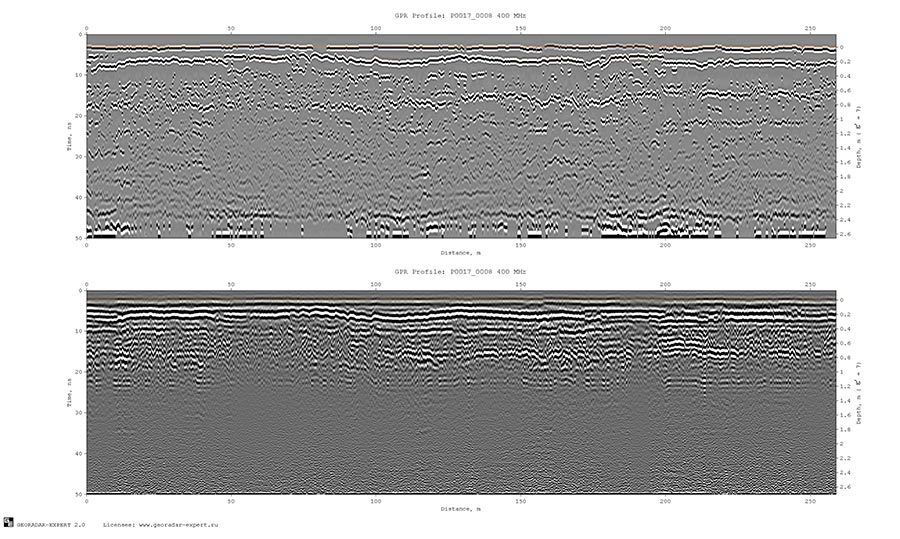 One of the problems a geophysicist encounters when processing GPR data is the suppression of reflections from objects located on the ground surface. These so-called air reflections can have a high level of amplitudes and effectively mask useful signals, crossing them with their inclined fragments. Using shielding for GPR antennas may not give the expected effect. The results of profiling by dipole low-frequency antennas, for which shielding is not provided, are most susceptible to this interference. Also, diffracted reflections from contrasting local objects located in a subsurface medium can be a source of interference. These reflections can also mask less intense reflections from the boundaries of the layers.

The spatial filter implemented in the GEORADAR-EXPERT software system allows solving this problem. Consider a GPR profile that crosses tram tracks. The figure below, on the left, shows this GPR profile before processing. Profile obtained by GPR with a 150 MHz low-frequency antenna. On this profile, intense reflections from metal rails and infrastructure objects of tram tracks cross weaker reflections from the boundaries of layers in the ground and mask them. The result of spatial filtering is shown on the right. As a result of filtering, the interference in the form of diffracted reflections removed; instead of this interference, reflections from the boundaries of the layers became visible. 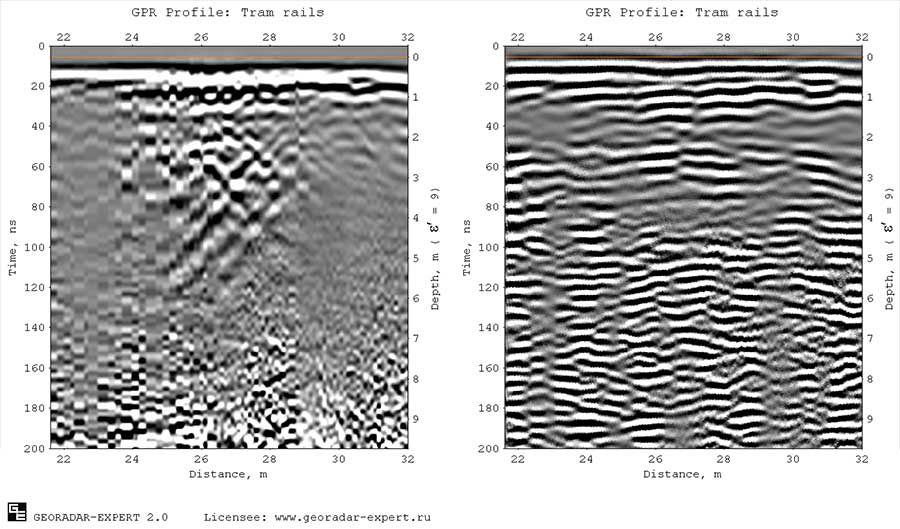 Options for digital processing of GPR profile signals, of which there are more than two dozen in GERADAR-EXPERT, allow to solve practically the whole range of problems that users face during GPR data processing. Automation of the user's actions frees him from the obligation of constant presence at the computer. The user can save the sequence of data processing procedures to a file and apply this sequence in the future. In batch processing mode, the user only needs to select a group of GPR data files, after which the load, processing and saving of the result is performed automatically, without user intervention. For a complete description of the capabilities of the GEORADAR-EXPERT software, see the user manual, which can be downloaded on this link: