One of the urgent problems in the operation of main oil product pipelines is the problem of detecting illegal tappings that entail environmental threats, as well as financial and image losses of companies involved in the transportation of oil products. At present, a large number of methods based on various physical laws and phenomena have been developed to detect illegal tappings. This publication presents the solution to this problem using GPR, which acts as a device for electromagnetic inspection of the pipeline and the GEORADAR-EXPERT software system.

Two sites of underground pipelines with a diameter of 720 mm and 530 mm were surveyed using GPR. Small diameter non-metallic pipes were connected to the pipelines in different places and at different angles. When inspecting the 720 mm pipeline, GPR profiling was carried out in two mutually perpendicular directions, as a result of which a grid of GPR profiles with 0.25 x 0.3 m cells was formed. When inspecting a 530 mm pipeline, the GPR profiles were parallel to the pipe and had the same direction. The results of GPR profiling were processed by the GEORADAR-EXPERT software system using the automated backscatter field analysis (BSEF) and combined into 3D assemblies, the cross-sections of which were examined to identify anomalies corresponding to the position of non-metallic tappings to the pipeline.

The figure below shows the horizontal cross-sections of the 3D assembly at depth intervals of 1.7-2.7 and 1.4-2.4 meters for a pipeline section with a diameter of 720 mm. The top of the pipeline is located approximately at a depth of 1.8-1.9 m from the ground surface. The 3D assembly was formed from sections of the Envelope signals attribute. 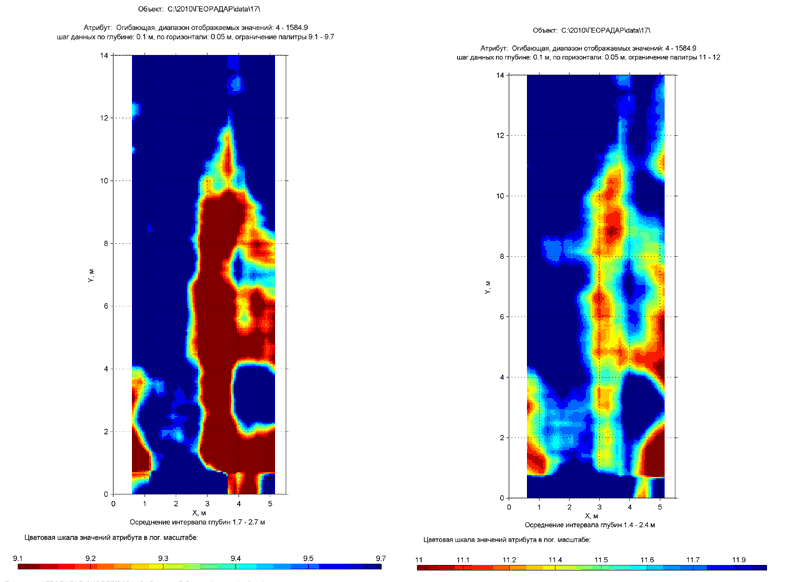 The figure below shows an overlay on a horizontal cross-section of a 3D assembly of a schematic representation of a 720 mm pipeline and adjacent non-metallic tappings, shown in red. Also, the figure shows a grid of GPR profiles.

The frequency attribute Irregularity spectrum was used to detect non-metallic tappings into a pipeline with a diameter of 530 mm. The vertical cross-sections of a 3D assembly of sections of this attribute, parallel to the Z-X plane of the 3D assembly, were considered. The top of the pipeline is located at a depth of approximately 1.8-1.9 m from the ground surface. The figure below shows an image of this 3D assembly. On the image of the 3D assembly shows the Z-X plane and the positions of the GPR profiles in the form of magenta parallel lines. 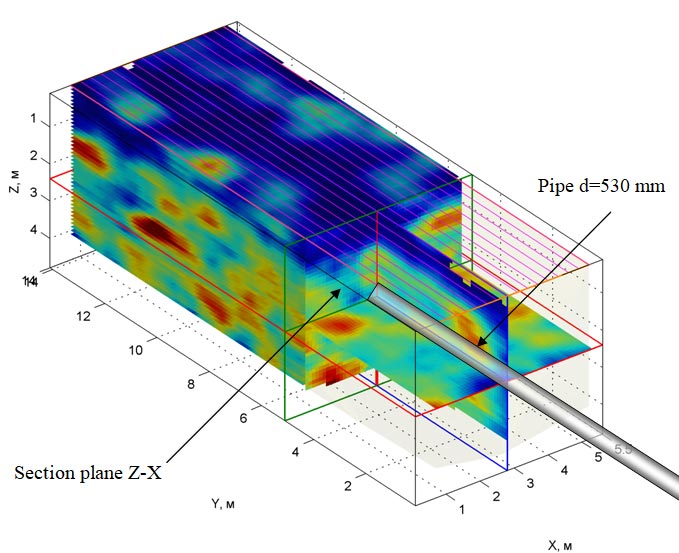 Shown below are vertical cross-sections parallel to the Z-X plane that intersect the tappings locations. On the cross-sections, the pipeline is marked with a black circle, and the tappings from pipeline are shown with black dashed lines. A visual analysis of the cross-sections shows that the Irregularity spectrum attribute have increased values and displayed in a yellow-red color at the locations of the non-metallic tappings. It is noticeable that horizontally located tappings on the sections stand out better than inclined tappings. This is due to the fact that at certain angles between the GPR antenna and the tap, not all the energy of the reflected sounding pulse enters the receiving antenna. But even this amount of reflections is enough to detect the presence of an obliquely oriented non-metallic tappings. 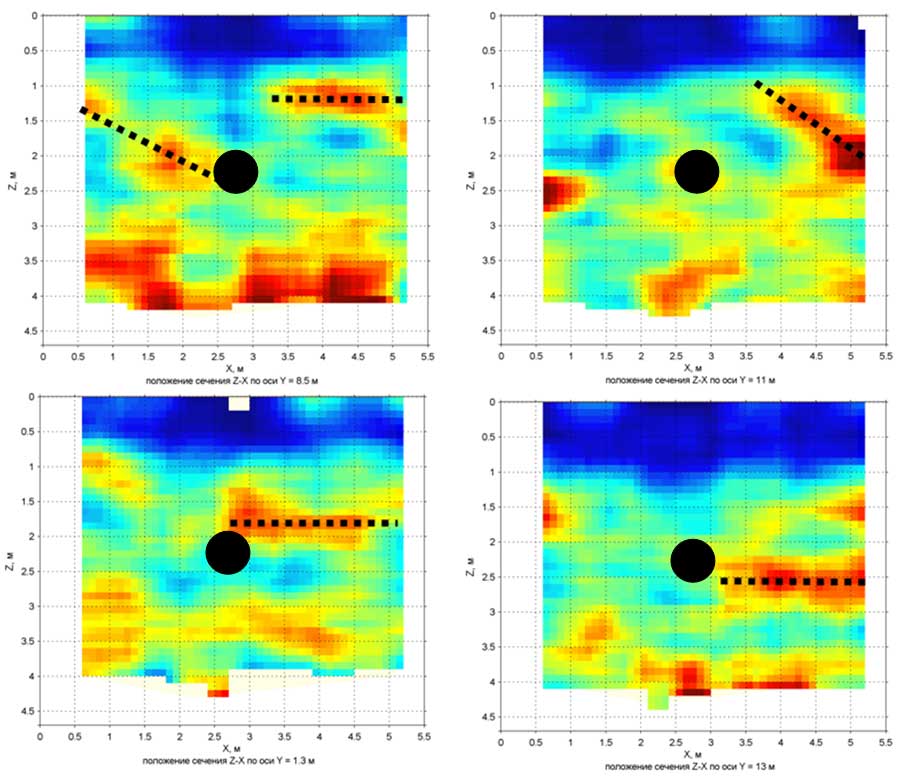