The purpose of the GPR survey, the results of which are presented in this publication, is to clarify the structure of the subsurface medium along the highway that crosses one of the small Moscow rivers. This river flows underground, enclosed in a reinforced concrete collector - see photo below. 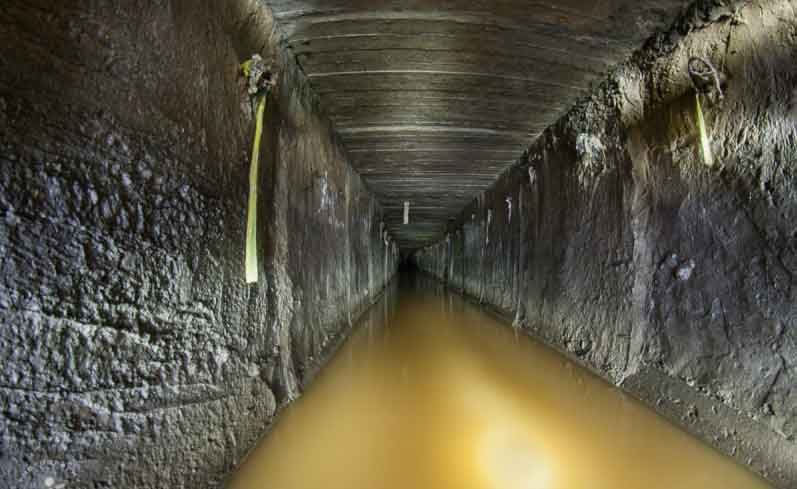 GPR profiling was performed by a 25 MHz antenna. The choice of such a low-frequency antenna is due to the requirement of the technical specifications to ensure the depth of GPR research up to two tens of meters. Such low-frequency antennas are quite large in size and for this reason shielding from interference for such antennas is not structurally provided. The figure below shows a satellite image in which the red line shows the position of the GPR profile.

The figure below shows the raw data of GPR profiling. 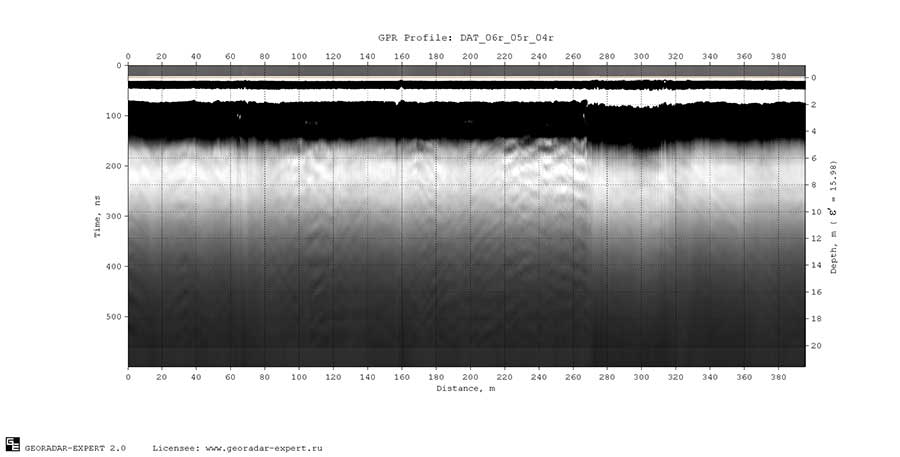 Since the GPR antenna was not shielded from interference, the wave pattern of the GPR profile contains numerous reflections from ground-based objects of road infrastructure. The figure below shows the GPR profile after applying digital signal processing methods to increase resolution and improve visualization of GPR data. As a result of processing, the information content increased slightly, it became possible to observe the boundary between the primary and bulk soil at a depth of about 2 m, but still, this is not enough to achieve the purpose of this GPR survey. 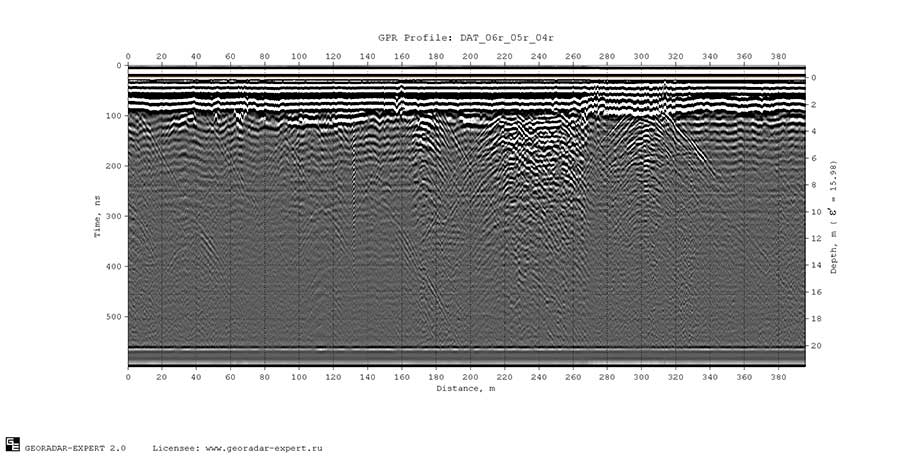 In such cases, the informational content of the GPR research can be increased by the transition from the presentation of data on the subsurface medium in the form of a set of amplitudes of reflected signals in the form of a radarogram to the set of characteristics of the subsurface medium or wave field reflected by this medium, which is presented in the form of an attribute section. For this purpose, the GEORADAR-EXPERT software implements an automated analysis of the BSEF (Back-Scattering Electromagnetic Field).

The choice of the section attribute is determined by the soil conditions and the purpose of the GPR survey. The most commonly used attribute is the real part of the complex relative permittivity (hereinafter - permittivity). The permittivity value shows how many times the speed of propagation of an electromagnetic wave in a medium is less than in a vacuum. Based on permittivity values, soil moisture can be calculated, for example, using the Topp formula [Topp, G.C., Davis, J.L., and Annan, A.P., 1980, Electromagnetic determination of soil water content: measurements in coaxial transmission lines: Water Resour. Res., V. 16, p. 574-582.] But sometimes it happens that the permittivity section cannot fully provide information about the structure of the subsurface medium. As an example of such a case, the figure below shows a permittivity section for the GPR profile under consideration. 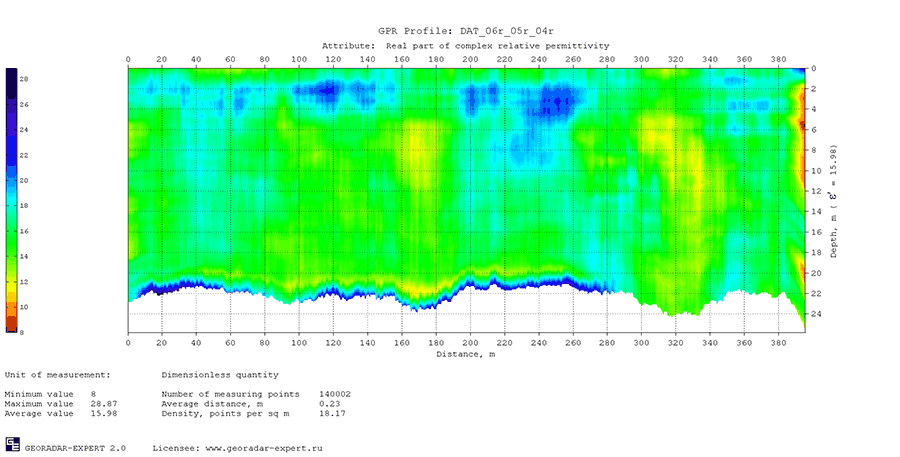 The reasons for the low informativeness of the permittivity section can be high attenuation of the GPR pulse in the medium, antenna mismatch with the medium, under which the power of the emitted GPR pulse is noticeably reduced, and also the interpenetration of materials of the neighboring layers. In the case of interpenetration, the boundary between layers is blurred, there is no sharp change in the dielectric constant at such a boundary, which is necessary for the formation of the reflected wave.

In such conditions, to study the structure of the subsurface medium, it is effective to use frequency attributes - for example, the center frequency of the spectrum of the reflected GPR pulse. The layers of different composition and degrees of humidity have different effects on the amplitude-frequency characteristic of the GPR probe pulse passing through these layers - i.e. each layer of the subsurface medium can be considered as a frequency filter with its own passband. Frequency attributes are quite sensitive to changes in the electrophysical characteristics of subsurface layers. The area of a section of a frequency attribute that has close values of the attribute can be interpreted as a layer.

The figure below shows a section of the attribute 'Central frequency of the spectrum of reflected signals', which was created according to the results of an automated BSEF analysis by the GEORADAR-EXPERT software and interpretation of this section. 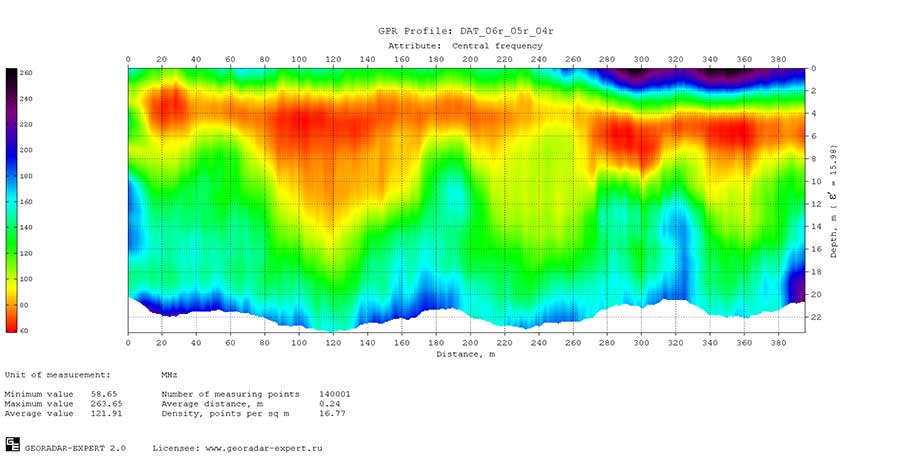 In contrast to the permittivity section, the paleorelief is clearly visible in the frequency section. A significant part of the paleo-relief is a buried paleochannel of the river. The bottom of the paleochannel in the section is indicated by a dashed line. The blue rectangle in the section shows the approximate position of the underground river collector. Information about the location of the river collector was taken from archival sources. To more accurately determine the position of the central axis of the collector, you can use the graph of average frequency values for the frequency section under consideration created in the statistical analysis module of the GEORADAR-EXPERT software.

The statistical analysis module is intended to summarize the results of GPR profiling and to visualize the variability of GPR data. Using the results of statistical analysis, presented in the form of tables and graphs, it is possible to establish a relationship between the physicomechanical characteristics of the medium under study (for example, soil or building structures) and various statistical indicators, thus forming a set of features that can be used in the future for assessment of the condition of similar objects.

In addition, graphs of statistical attributes can be used to clarify the position of subsurface objects on the GPR profile according to the position of local extrema. The figure below shows a graph of the average frequency values for the considered frequency section.

The local extremum of the graph corresponding to the position of the central axis of the collector is located at a distance of 24.2 m from the beginning of the GPR profile. On the graph, the position of this extremum is shown by a dashed line. The figure below shows the result of superimposing the center frequency section over the satellite image of the GPR survey area.

Using the GEORADAR-EXPERT software allowed us to successfully achieve the purpose of GPR research and, despite the low dielectric contrast of the section, to obtain information about the investigated subsurface environment. Without the use of the BSEF automated analysis method, this GPR study would have to be considered unsuccessful and resorted to more expensive methods of geophysical studies, which also have a lower resolution compared to the GPR method.