Non-destructive quality control and diagnostics of the state of reinforced concrete building structures is one of the urgent tasks of GPR. Searching for and revealing hidden defects in concrete using a GPR provides a significant advantage over acoustic methods - the depth of the GPR is higher and there is no problem of contact with the surface of the structure under study. There is one difficulty - the identification of hidden defects signs from ground penetrating radar records.

In the example below, a GPR survey of a reinforced concrete floor beam was carried out in order to identify latent defects in concrete involved in the formation of cracks, both latent and visible from the outside. Latent defects include cavities filled with air or moisture, zones of increased concentration of microcracks that appear in structures during the construction period or that appeared during operation, underconsolidated areas of concrete and various types of corrosion.

The survey was carried out by GPR with a central frequency of 1700 MHz. The figure below shows the moment when the GPR profile was recorded along one of the ceiling beams and the position of the GPR profiles numbered 1 and 6, the processing results of which will be presented in this publication.

Here is a more detailed view of this visible crack in a concrete ceiling beam: 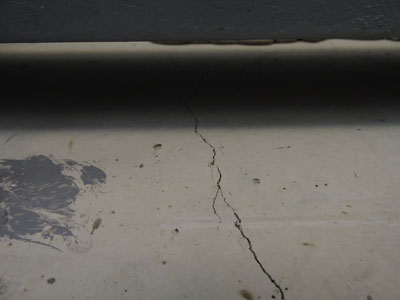 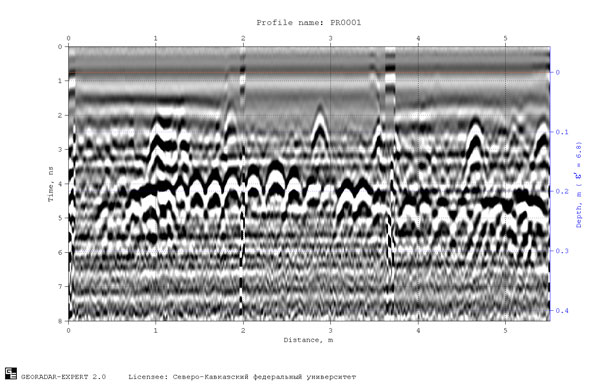 Defectoscopy of concrete and reinforced concrete building structures is based on identifying areas of the cut with increased values ​​of the Q-factor attribute (the ratio of the center frequency of the reflected signal to its width at a level of -3 dB). In low-moisture concrete areas with increased values ​​of the Q-factor attribute correspond to areas of increased cracking, porosity and reduced concrete density. On the other hand, in flooded building structures, lower Q-factor values ​​correspond to areas of weakened concrete, since pores and cracks are filled with water.

Below is a section of the Q-factor attribute for the considered GPR profile. Since the concrete at the time of the study was in a dry state, it is precisely the increased values of the Q-factor that correspond to the zones of violations within the concrete floor beam. In the section, the zones of violations are displayed as bright spots. It is noticeable that all latent defects in this section are located in the reinforcement zone, which may be associated with corrosion processes in the area of contact between concrete and reinforcing bar. 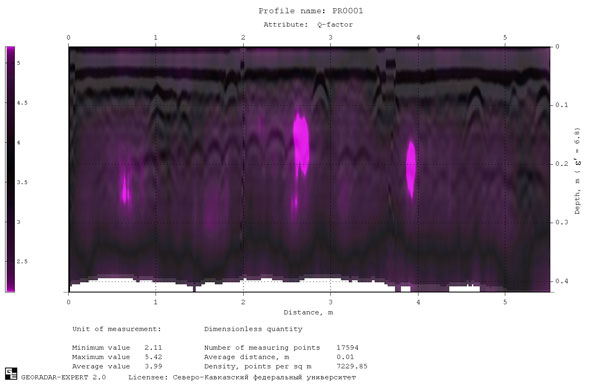 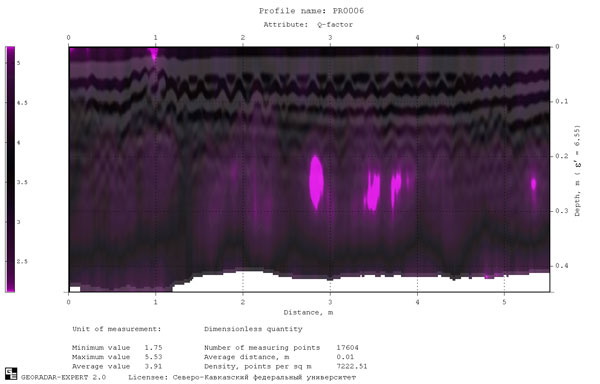 As you can see, the concrete defect detection module effectively solves the problem of finding reflections from latent defects among similar GPR reflections.