A survey of the coastal slope in the zone of intensive construction was carried out by a GPR with a shielded antenna of 250 MHz in order to identify potentially dangerous landslide sites. The figure below shows a satellite image with a GPR profiles position (orange arrows). The construction zone is located at the top of the image. All GPR profiles have the same direction from the riverbed up the slope, towards the object under construction. 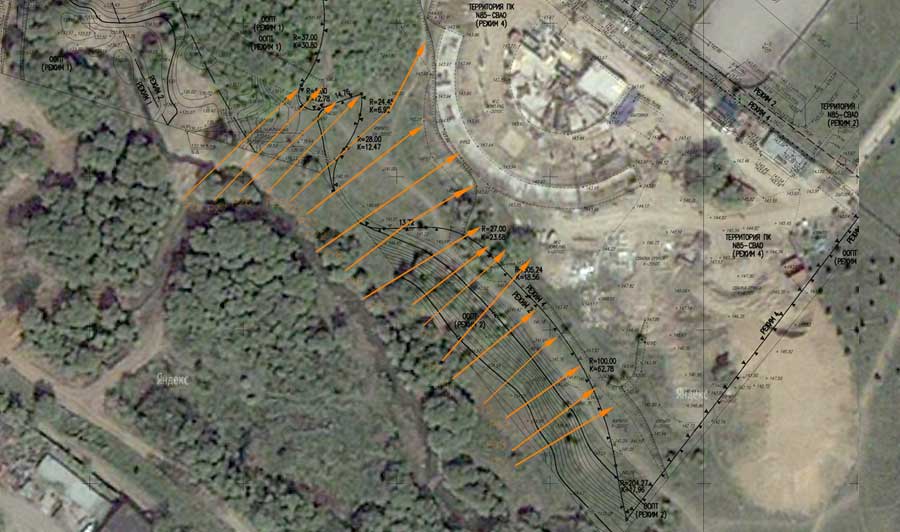 In the process of GPR survey, 17 GPR profiles were obtained. According to the results of the automated analysis of the backscattering electromagnetic field (BSEF) of these profiles, the software package GEORADAR-EXPERT created sections of the Damping rate attribute (GPR pulse damping decrement). From these sections was formed 3D assembly. Analysis of the change in the values ​​of the attribute Damping rate showed that the slope under study is a two-layer earth, where the upper layer is a loose mass (where high values ​​of the damping rate) and the lower layer is a dense soil (where low values ​​of the damping rate).

The study of the contact zone between the upper and lower layers revealed an extended trough, which can act as a sliding surface for loose masses. The figure below shows the working window of the GEORADAR-EXPERT software package in 3D mode. In the contact zone of loose and dense soils (the value of the attribute Damping rate = 0.37), an isosurface was created, to display which the loose layer in the 3D volume is set to transparent. The lines on the upper horizontal plane of the axes of the 3D assembly show the positions of the GPR profiles. 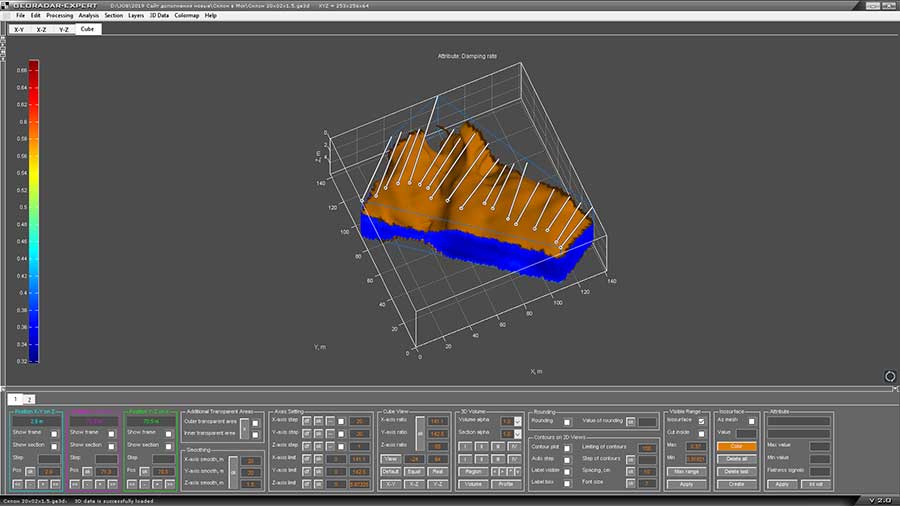 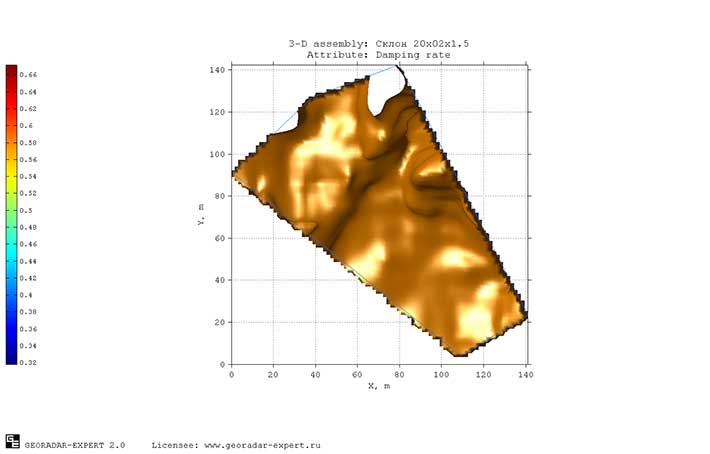 The figure below shows a vertical slice of a 3D assembly that crosses a hollow. The border between loose and dense soils is indicated by a dotted line. The position of the slice is shown on the left side of the figure. The lowest point of the trough on the section is located at a depth of 3 meters.

The figure below shows a satellite image of the GPR survey site with overlapping isosurface, passing through the zone of contact between loose and dense soils. Bottom of the trough are marked with a blue line. 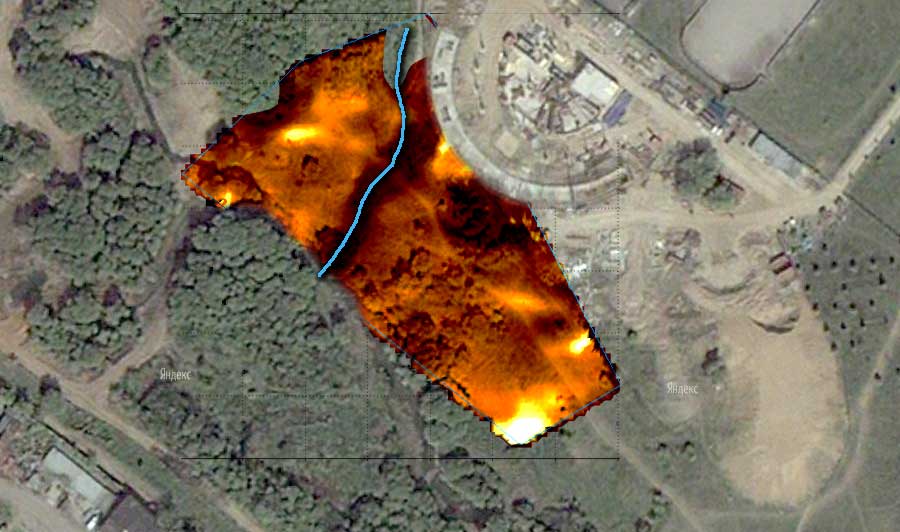 During heavy rains or melting snow, the water flowing down the slope changes the physico-mechanical properties of wetted loose soil, with the result that water-saturated soil in a trough gives additional load on the sliding surface, which reduces the stability of the slope. Soil vibrations due to construction activities also contribute to the increased risk of activating the landslide process.

The use of automated analysis of the backscattering field implemented in the GEORADAR-EXPERT software system allowed us to solve the problem of detecting unstable zone of the coastal slope for subsequent actions to eliminate landslide hazard. The following shows an attempt to identify the zone of landslide hazard with the help of digital signal processing of a GPR profile. The figure below shows one of the profiles, a part of which intersects the location of the trough in the zone of contact between loose and dense soils. This is the sixth profile, if you count the profiles in the GPR profile position plan from left to right. Other GPR profiles have a wave pattern of the same type with this profile. 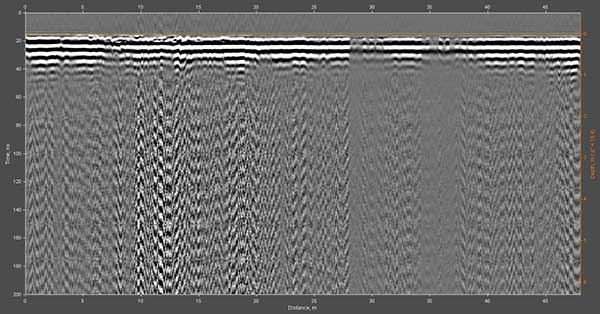 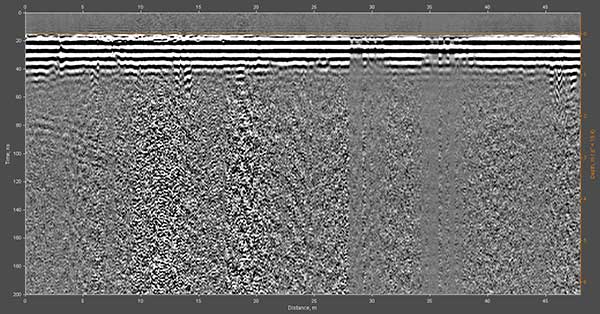 Interference was effectively removed, but the attenuation of signals in a loose wet layer is so high that the reflection from the contact boundary of the upper and lower layers is not visible. In the upper part of the profile there are horizontal extended reflections formed by a contrasting surface layer. These extended reflections can be repeated many times in the lower zone of the GPR profile and mask useful signals there (if they exist). To eliminate these reflections, the processing option 'Signal Decomposition in Components' was also applied. The result is shown below: 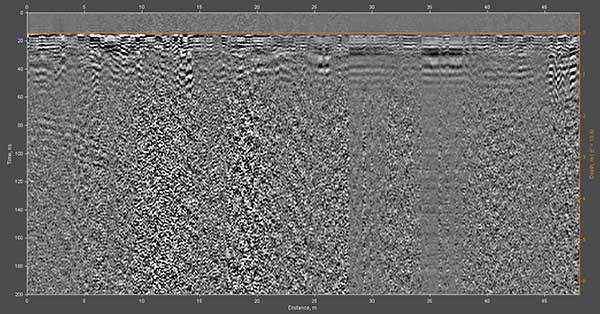 Further, it is necessary to attenuate high-frequency random noise, which can mask lower-frequency useful signals whose amplitudes can be comparable to the amplitudes of this noise. For this, a spatial smoothing filter is used. The result of applying this filter is shown below: 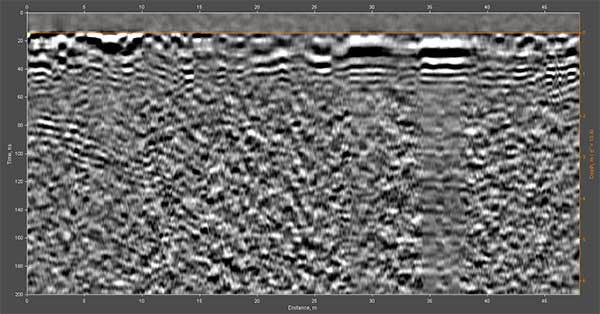 On the wave pattern of the GPR profile, some ordered signals can be seen that could be interpreted with great doubt as fragments of reflections from the contact boundary between loose and dense soils but, in general, the result of processing can be assessed as unsatisfactory. The use of frequency filters, wavelet decomposition and other tools for digital signal processing also did not lead to a positive result.

Thus, on the basis of the work performed, it can be concluded that automated analysis of the backscattering field is the most effective and often the only tool for obtaining useful information from highly noisy GPR data.