The development of high-rise construction and the development of underground space in the territory of modern megacities imposes additional requirements on the completeness and quality of engineering surveys, including the methods of engineering geophysics. The increase in the depth of research, the creation of deep foundation ditch for the placement of foundations and the installation of underground floors of buildings leads to the need to determine the strength properties of limestone.

Below is the result of a GPR profiling of limestone with a GPR antenna 50 MHz. The wave pattern of the GPR profile contains the reflections from the limestone roof, but below this boundary the useful signals, which were significantly weakened during propagation in the damp upper layer, are overlapped by more intense noises. Prior to processing in the GEORADAR-EXPERT software we could say that the depth of this GPR survey does not exceed 10 meters:

The figure below shows a section of the real part of the complex permittivity, created on the basis of the result of an automated analysis of the backscatter electromagnetic field (BSEF) using the GEORADAR-EXPERT software system. On the section, in the limestone stratum, a zone of weakened, destroyed rock, whose thickness varies from 1.6 to 31.7 meters, stands out confidently: 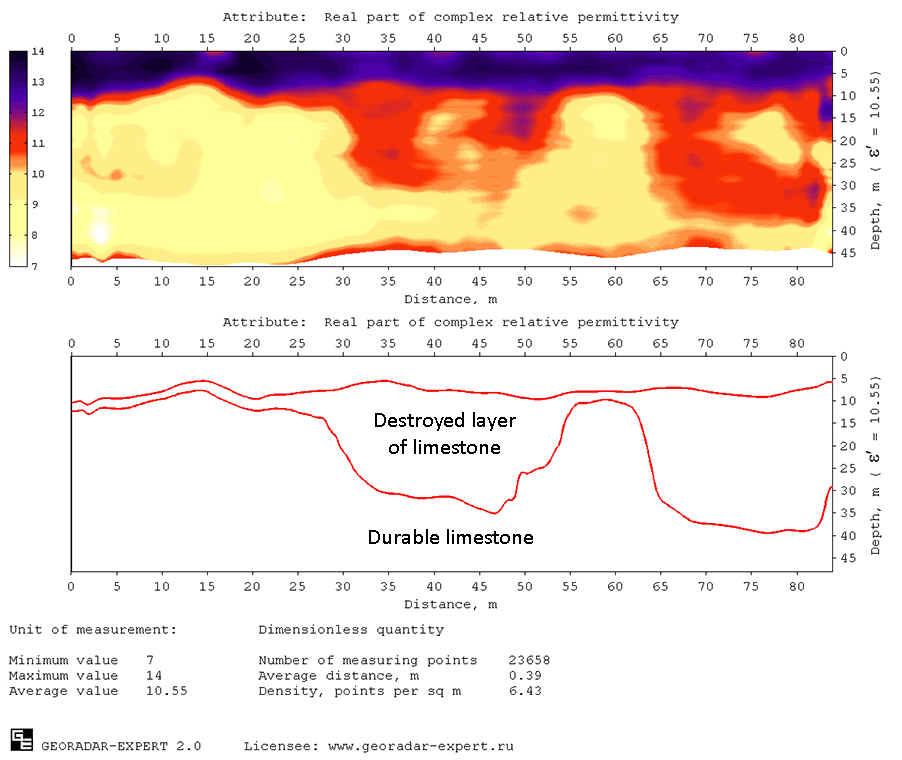 The boundaries of the layers, including the destroyed layer of limestone can be exported to a file. As a result of the export, the data for each layer is saved to a separate tab of the MS EXCEL spreadsheet file in the XLS or XLSX format. The figure below shows the result of exporting layer boundaries from a tab for a destroyed limestone layer. The table consists of four columns - the distance from the beginning of the profile, the position of the roof of the layer from the ground surface, the position of the sole of the layer from the ground surface and the thickness of the layer. The bottom part shows the statistics: minimum values for columns, maximum, average, and standard deviation. Also shown is the sectional area of the layer. 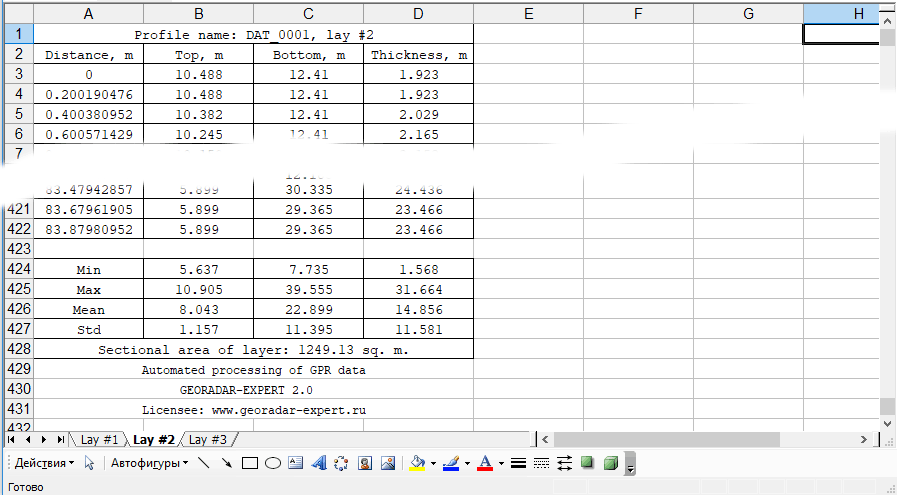 As a result of using the software system GEORADAR-EXPERT, the depth of research has increased from 10 to 40 meters. And the transition from presenting information about the subsurface environment in the form of an array of amplitudes of reflected signals to the characteristics of this subsurface environment in the results of processing using the BSEF automated analysis method increases the information content of the section and makes the result more understandable to the requesters of GPR survey.